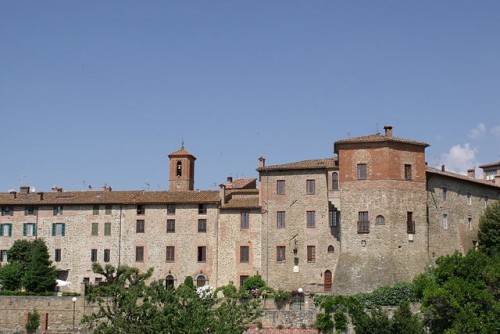 Photo CC BY by LigaDue

From these hills   a magnificent olive oil comes, appreciated on tables all over the world for aroma, taste, organoleptic properties.
Always present in the life in the village, this product has gained recognition as Dop. The most interesting hypothesis on its etymology is that the name Paciano derives from the Roman god Janus. The urban structure of the borgo comes from the thirteenth century, has a fan-shaped layout on three parallel streets connected by orthogonal alleys.

The village is enclosed in the fourteenth-century walls about 600 meters long, which includes eight towers and three gates, Fiorentina, Perugina and Rastrella. Throughout the Middle Ages the town was an important castle guarding domain Perugia territory Chiugi.

A walk through the narrow streets of the centre allows you to immerse yourself in the ancient atmosphere. Entering you can see the Cennini palace (XIV century), restored by Cardinal Francesco Cennini in 1500. The south facade is characterized by the tower now known as rocca Buitoni. The building has three floors, the first of which is rich in frescoes of the sixteenth century; inside there are two chapels.

Once past the Etruscan well, here  the church of St. Joseph dates back to the fourteenth century, is built of stone and three quarters under the road. Inside is preserved the ancient banner of municipal, 1450 with a painting of the Madonna delle Grazie from the workshop of Benedetto Bonfigli. In 2000, under the protection gaps were found frescoes dating back to the fifteenth century. The building also houses a small collection of vestments.
Closeby, the church of San Carlo Borromeo. It was built in the seventeenth century through the work of Cardinal Cennini, has a beautiful stone portal serene era and contains a wooden Christ of 1620. Finally it should be noted the seventeenth-century palace Baldeschi, made by the will of the Abbot Giacomo Baldeschi in local stone and brick.

Outside the historic centre the parish church dedicated to the Assumption, built around the tenth century; the Church of the Saviour or “Ceraseto”, built before the tenth century on an ancient pagan temple (the fresco of the central altar is a pupil of Perugino, Gianbattista Caporali); the convent of San Antonio, dating back to the fifteenth century;  the tower of Orlando, the only remains of the castle of Paciano Vecchio.

What to taste here? 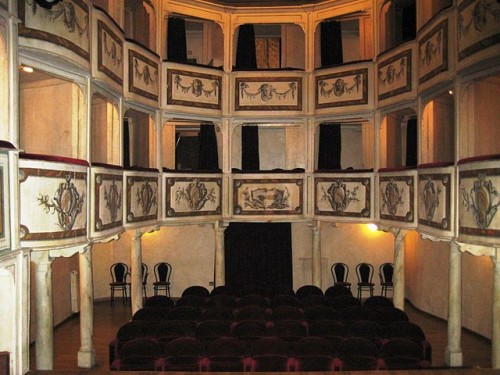 Monte Castello di Vibio: where the oil is gold

One of the most popular products of Monte Castello di Vibio is definitely the oil so that the territory is inserted within the “Road of extra virgin olive DOP Umbria” located in Trevi. Most of Montecastello’s hills, for centuries, are a place where to grow with care and passion  olive groves, as well as where to produce a high-quality oil, are one of the most valuable features of the agricultural landscape.

What about its historical background?

The etymology of  “Monte Castello” is derived from the typical structure of a medieval fortress built on top of a hill while the addition of the “Vibius” dates back to a time more recently, in 1863, the year in which a Royal Decree of King of Italy, Vittorio Emanuele II, allowed to change name. The choice of “Vibius” might come from the name of an ancient and noble family of Perugia, a member of which became Roman emperor.

Of particular note is the theater of Concordia, a priceless structure of just 99 seats between the boxes and stalls, designed in full climate post revolutionary France in 1789 and then headed right to that “harmony between peoples” that was recreating in Europe to early nineteenth century. Its inauguration is dated 1808, in a cultural heyday, almost as if to redeem by Montecastello of centuries of vicissitudes and domination suffered.

The theater, it said in a document of the time, “was built small, a measure of his country.” It was then painted in 1892 by the young painter Luigi Agretti, just fifteen!! In addition to the regular theater season, the theater of Concordia was facing several times in the news even with national initiatives and proposals worthy of note, such as festivals, meetings, exhibitions, etc. That the theater itself is able to accommodate both that promote. In 2002 the theater was also celebrated by the Italian Post Office by issuing a stamp in the “Italian artistic and cultural heritage.”

What to eat once you get here?
The lamb chops is a specialty consisting of lamb chops to be tasted very warm and eat with your hands here is the reason for the name . The recipe calls for seasoning the chops with garlic, salt, pepper and fat ground. They are then required to rest for about one day and about after being cooked on the grill are served with a drizzle of extra virgin olive oil. 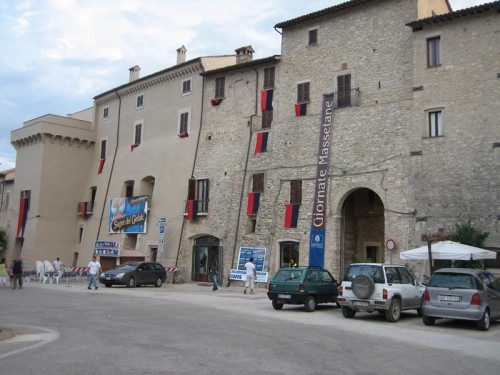 One of the main stations of the Roman Umbrian stretch of Via Flaminia, the ancient village of Roman origin in the Middle Ages saw the construction of a castrum on a cliff at the foot of the Monti Martani, still retains the castle walls and interesting buildings both civil and religious.

You enter the historical centre from the big door that overlooks Piazza Umberto I, decorated on the right side of carved stones and higher education from the municipal coat of arms. Beyond the door, just to the right is the Church of San Felice and the opposite side of the square, the building that housed Giuseppe Garibaldi and his wife Anita in 1849. Continuing along Via Regina Margherita, we meet on the right the Church of San Sebastiano, and nearby the sixteenth century Palazzo Comunale, which comes with the appearance of the recovery of the late nineteenth century and an elegant bell tower.

Outside the historic centre, the most beautiful churches, such as the Abbey of San Fidenzio and Terence and the nearby Church of Santa Illuminata. The first source is remote (IX-X century) and by the Benedictine monks who ruled it until the end of the fourteenth century. Overlooking the facade thirteenth square stone rows white and red with the bell tower; engaging is also the interior. Santa Illuminata with its adjoining monastery dates from the eleventh century and bears in front a round portal.

Significant enough to be considered one of the oldest religious buildings and evocative of Umbria, mystical land, is the Church of St. Mary in the Marsh, of which we know from the seventh and eighth centuries. The facade of the fourteenth or fifteenth century hangs forward and is enriched by the rosette; the three-nave interior preserves urns, inscriptions and Roman fragments; please observe the great Corinthian capital, the stone altar and the frescoes on the walls.

Remain to be seen the Abbey of San Faustino, built on the ruins of an ancient Roman villa, the Church of Santa Maria delle Grazie, the end of the fifteenth century, the rectangular facade and bell tower, and a few km the village of Viepri. In its compact architecture of the village emerge Abbey built around 1150 in Romanesque still preserved, and part of the castle built in 1380, in which there is another church, that of St. John. Other two are the castles, ie nuclei fortified area: that of Colpetrazzo (XIV-XV century) and that of Montignano in a panoramic position.

San Pietro above the waters is nearby, a seventeenth-century convent with restored frescoes, now intended to slow period residence for visitors who want to enjoy the serene beauty of the landscape martano.
Two fantastic dishes can be tested here: picchiarelli alla Massetana, sort of fettuccine with a sauce of chicken entrails; and palomba, the greedy, jugged wild pigeon, always cooked “alla Massetana”, to say that here they do better here than elsewhere. 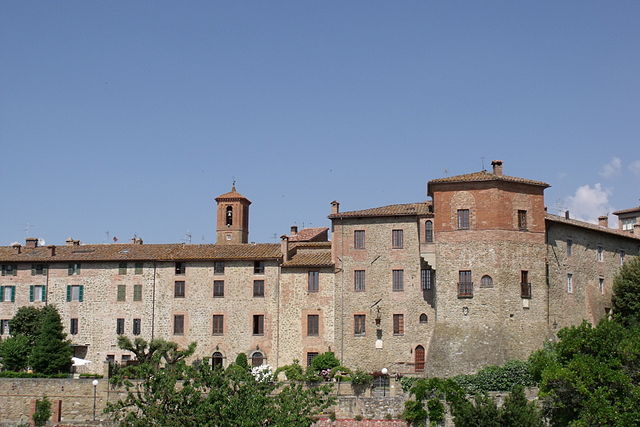