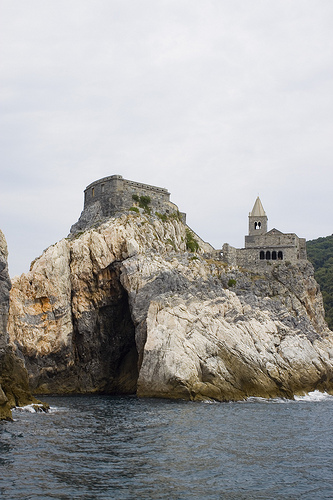 If you’re in the mood for something truly fascinating, look no further than the Italian town of Portovenere. Not only is Portovenere a UNESCO World Heritage Site, it’s also home to some of the most impressive sights in this particular region of Italy. If you love the romance of a gated fortress, you’ll certainly find much to your liking in this ancient city.

The Sights of Portovenere

There is much to see inside the walls of Portovenere, but there is also a bit to see outside its medieval gates. The city is located near the coast, across the bay from Lerici. Just outside of the city is a rocky bank leading down to the sea. These rocks have been affectionately called Byron’s Cave as this was an area where the famous poet, Lord Byron, used to swim.

On the promontory jutting into the sea, a temple to Venus once stood. Today the site is marked by a pretty, aging church that creates a picturesque area against the backdrop of the sea. The Church of San Lorenzo is located inside the city and dates back to the 12th century. This church has been damaged over time by everything from the natural elements to cannon fire. The church has been repaired and preserved countless times, however, and hosts a miraculous image of the Madonna on the alter.

San Pietro Church is another interesting religious building inside Portovenere. This church is a black marble building dating back to the 6th century. Over time it has been expanded and the shape and design of the building has changed, including a brief stint as a fortress in the late fifteenth century.

While there are many fascinating sights inside Portovenere, they all pale in significance to the castle that dominates the landscape. The Andria Doria Castle was built between the 12th and 17th centuries and is open to visitors during the summer months. The castle offers a large bit of medieval flavor to your travels, but you can experience it all a bit more personally in the medieval center of the town.

Start your journey in the center of town by entering through the old city gate. Experience the vaulted walkways, stairs and old shops along the narrow streets before walking up to the castle at the top of the hill. The walk is easy enough and has interesting scenery as well along the way. Once you’ve reached the top of the hill, take a look out across the city toward the sea for truly breathtaking views.