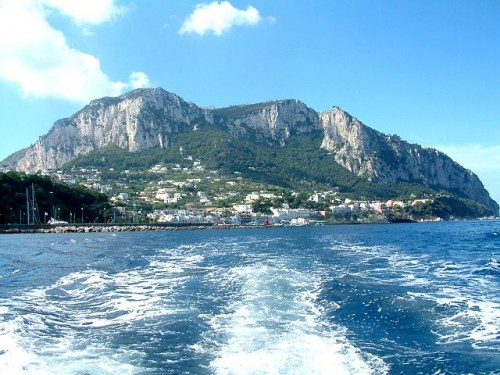 Capri is a legendary location: this famous island is located in the Tyrrhenian Sea, off the Sorrentine Peninsula, on the south side of the Gulf of Naples.

The intriguing combination of fab beauty and hedonism has captured Roman emperors and international writers and showbiz legends still strolling here from all over the world!!!

The Isle of Capri has been made famous by its wild and untouched beauty, the spectacular Blue Grotto and the monumental stacks.
The name “Blue Grotto” has to be credited to two German tourists who visited Capri in 1826. In fact Augustus Kopisch, a writer, and Ernst Fries, a painter, visited what was already known locally as “Grotta Gràdola”, even though it was avoided as a bewitched place because of the legends about monsters and witches dwelling in it!

What else to look for in Capri? Many archeological stunning location are plunged into the natural scenario.
Villa Jovis is the largest of the Capri imperial villas, for example, with a very peculiar location and a massive structure on the deep and narrow straits of the “Bocche di Capri“. 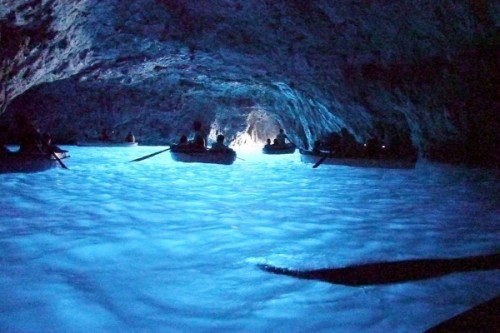 Capri also houses one of the most traditional and centuries-old monasteries: the Certosa di San Giacomo. Certosa di San Giacomo is the oldest historic building of Capri and its construction dates back to 1371. This vast complex was built at the behest of Count Giacomo Arcucci and the land that houses the monastery was donated by Queen Giovanna I of Anjou.

The Certosa was the result of a vow made by Count Giacomo. His desire for paternity, in fact, found many difficulties and so he swore that as soon as he became a father would erect a colossal monument to thank the gift received.

And so it was. As soon as the Count became the father of two children, he kept his vow and ordered the construction of the Certosa di San Giacomo. With the passage of time, it has lost some of its original character because many changes were made for renovations and restoration sustained over time. It consists of three large blocks: a first part housed the pharmacy and the church for women, a second block the foreigners who went there on a visit and finally the third block that was completely dedicated to the brothers and their solitary life of prayer . Here are the Great Cloister and the Small Cloister.

Impressive are the Roman marble columns and arches that support the two kiosks. An atmosphere of peace and tranquillity reigns walking into this silent oasis of beauty. Close to the Carthusian monastery, then, you can find a park with hectares of gardens and viewpoints that can be seen from this place is really very charming.

The Scala Fenicia is a series of steps built by the first Greek communities established in Capri, and it was the only communication route between Marina Grande and the top parts of the island until 1877.

The top part of the steps are carved into the rock according to the customs that they used when joining the acropolis to the harbours. The steps begin in the Sea Villa district, the most ancient Greek centre in Capri and, crossing gardens and vineyards, it climbs and crosses the road near the chapel of St. Anthony. The church square is a moment of rest for those people who climbed the difficult slope.

On the island of Capri is one of the most spectacular pathway in the world: Via Krupp. Its history dates back to the early ‘900 and is closely linked to the figure of the German magnate Friedrich Alfred Krupp. The latter spent his holidays at the Hotel Quisisana Capri but his hotel he found it very difficult and inconvenient to reach from his yacht moored in Marina Piccola. It was then that the industry tycoon decided to find a solution: to build a road that would link the island’s old town with Marina Piccola, then accessible only via donkey!

The idea of ​​Krupp, who bought the work for the whole area stretching from the Certosa di San Giacomo to Castiglione, was to make the new road work in the public interest. It was for this reason that his project was approved and entrusted to the Neapolitan Emilio Mayer.

To bring to life  the street at the time they needed to cut the rock to make theor way to the sea and only in 1902 the work of the street, which has many bends, was completed. Since then, the route became known as “Via Krupp”. Unfortunately, with the outbreak of the First World War, on September 20, 1918, the city council decided to rename the property as the “way of Augustus” for the simple reason not to keep on the island any German name. In 1961 the road has once again reclaimed its previous name.

As a reminder of the busy Via Krupp 60s was Bruno Manfellotto: “There was a season during which Via Krupp also became the way of children and teens. [..] In the afternoon, when the sun was not as high, Via Krupp was filled with mothers, or the latest nurses with apron and corals, that would go far to walk from the gardens of Augustus with small foot or in wheelchairs. In the evening, after sunset, it was up to the older boys, who in the twilight they exchanged their first kiss or caress a dare. ”

Since the ’70s via Krupp began his endless journey to degradation and in 1976 – due to the fall of a boulder – the road was closed for the first time. After a failed attempt to reopen the area in 1994, in 2008 7 million euro were allocated by the Campania Region  that would serve only for some work to be performed on via Krupp but nothing stopped the landslide of 2009 that did not spare the home of Fra Felice which years ago was bought by tycoon.

Over the years there have been many fallen stones from the road that today is still closed indefinitely to protect the lives of citizens and tourists who can admire Via Krupp, that corner of paradise between rocks and the sea, only by high thanks to the wonderful gardens of Augustus which overlook a landscape that leaves everyone breathless.