Etruscan Landmarks in Umbria and Tuscany 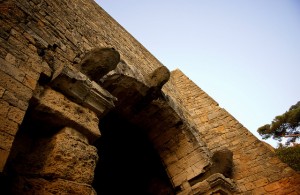 Italy has a rich heritage dating back thousands of years, but many forget that there were residents of Italy even before the Coliseum and Temples. The Etruscans lived in Italy before the ancient Romans we think of today, and about 200 before the time of Christ, almost all of Italy was under Etruscan rule. Today you can find artwork and treasures collected or created by the Etruscans in all corners of Italy thanks to museum collections, but you can also find ruins of the Etruscan cities throughout Italy, with a nice collection of artifacts in Umbria and Tuscany.

Located on the coast of Tuscany, Populonia was an important seaside town in the days of the Etruscans. Today if you were to visit, you’d see only the walls of this one medium-sized city, but just outside the walls of the city are many other interesting artifacts including tombs and necropolises along the road leading up the city. There’s also a small museum of artifacts that were found in the ruins of the city displayed near the ruins as well.

If you like the architecture and designs rather than small pieces of art, Chiusi is a great place to visit. In this area, you can find ancient Etruscan tombs open to the public if you’re willing to venture in and happen to have a flashlight in hand. The best of the tombs are closed to the public as they are undergoing renovations of their impressive murals, but if you visit the museum located in Chiusi, you’ll be able to arrange a visit to some of the larger tombs. If you’d rather, just poke around in the tombs that are open to visitors without special arrangements. You can also see stretches of the original underground aqueducts that were built by the Etruscans into a rocky hillside.

Once an ancient center of Etruscan life, Volterra has a medieval core surrounded by the original walls built by the Etruscans. Granted, some of the walls have been rebuilt over the centuries, but there are stretches of the originals. Volterra also boasts a large stone gate built into the walls that is impressive not just because it is more than 2,000 years old, but because of its size and function – it’s still in use today. There is an impressive museum in the city as well featuring small pieces of art and many tomb artifacts.