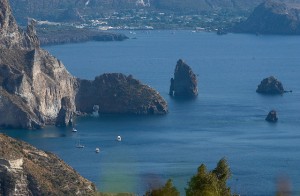 If you’ve even remotely fascinated with the old Greek or Roman mythology, the Lipari Islands off the coast of Sicily should be a stop on your tour around the country. The Lipari Islands are often called the Aeolian Islands because they were considered the realm of Aeolus, the Greek and Roman god of the winds. The islands today are an excellent spot for tourists to see beautiful beaches, small towns and astonishing scenery. If you happen to walk the footsteps of the mythical Odysseus at the same time, that’s only an added benefit.

The Lipari, or Aeolian Islands, are visible from the coast of Sicily, and you can get there by ferry all season long. Be aware, however, that there are crowds during the summer, and during the winter months, the ferry might be canceled for a few days at a time thanks to the bad weather. Visiting the Lipari Islands brings you closer to the ancient myths, while also bringing you very close to fantastic scenery, excellent fishing and some beautiful beaches.

The major islands of the group include Lipari, Salina, Filicudi, Alicude, Stromboli, Panarea and Vulcano. As the name suggests, these islands are rugged lands created by erupting volcanoes. Vulcano and Stromboli still have active volcanoes, but the others have not seen an eruption in living memory. The landscape created by the volcanic eruptions over time has created rugged beauty with deep caverns, steep cliffs and amazing views. The islands aren’t necessarily an easy hike, however.

The Lipari Islands are often called the Aeolian Islands after the Greek god who was said to inhabit the area centuries ago. The islands were first settled by the Myceneans as early as 1400 BC. The Myceneans were replaced by the Sicels who came over from Italian mainland. The Greeks moved into the region and thrived there for some time before the islands became part of Italy during the conquest of Sicily by Romans. These beaches were favorites of pirates as well.

Today you can see remnants of all of these historical elements in museums, and you can walk the beaches. Ruins of past civilizations are found on Lipari, the largest of the islands, and you can find black sandy beaches on the coast of Vulcano. Stromboli is arguably the most famous of this island chain, however, thanks to an Ingrid Bergman movie of old and it’s impressive deep water that is much loved by divers.