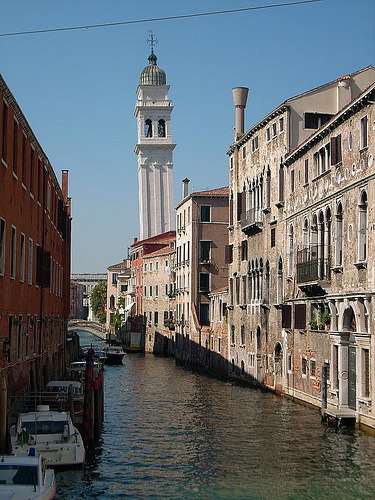 Venice is one of the most popular cities in Italy. It’s considered one of the most romantic spots in all of the country and it’s noticeably darker and more morose than some of the other cities throughout Italy. This is not to dissuade travelers, of course, the darker city is deeply romantic and intriguing.

The city of Venice is unique thanks to its island home and interesting sights. Within Venice you’ll find small streets free of traffic that make it easy to walk and stroll. The winding canals that travel through the ancient city are pretty to watch and a great way to move between locations as well. The actual city of Venice is made of 117 small bodies of land. They are all connected by more than 400 bridges and 150 canals. The canal through the middle of the city is the most famous – the Grand Canal.

Venice is located along the coast of Italy in the far northeast. It’s barely protected from the Adriatic Sea by a small strip of land, which makes it safe for so many houses build on the water, but also a bit foggy and wet. There is rain in the city almost year round, and winters are especially wet with plenty of fog and chilly conditions. The summer is much warmer, but humid as well.

Flooding is a frequent occurrence in the city – you can expect flooding about 60 times per year, primarily in the late fall and early winter. This might add an extra big of fun and adventure to your trip if you’re planning to travel during this time. It is also the least crowded season in the city.

While you can arrive at the city of Venice on a train or bus, once you’re in the city itself it’s perhaps best to travel as the residents do – on the vaporetti, or boats. The boats are much like floating buses that move through the city along the Grand Canal. Water taxis and gondolas are other options for traveling through the city, but they can be expensive and perhaps more of a tourist activity than a true means of transportation. Many of the locals are content to walk through the city.

Outside of the beautiful churches and museums throughout Venice, there is much to discover in the city and in the surrounding area. Venetian glass is especially popular as is the lace that can be found on the islands, like Murano, near the city.

In addition to lace and glass, the Carnival masks found throughout the city are popular keepsakes and gifts as well. This is, after all, the original location of Carnevale and perhaps still one of the most interesting celebrations before Lent.  Carnevale is a ten day street festival held 40 days prior to Easter. It is the most popular festival in the city, and a great time to visit as well.