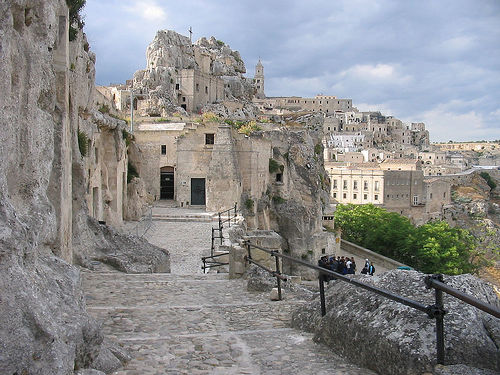 Near the instep of the “boot” that is Italy, you’ll find the small city of Matera. At first glance it’s not an impressive town – essentially the same as so many other towns and cities in this region of Italy. But there is a great deal to discover in and around Matera – some of which you’ll never see anywhere else in the world.

The Sassi of Matera

Approach the city of Matera from one side and you see a dusty town consistent with Southern Italy. Approach the city from the other side, however, and you find yourself driving along a cliff road looking down into an extraordinary gray world. Along the sides of the cliffs are homes and caves that are cut out of the stone of the cliffs, perched along a wall of stone and fascinating in their ancient history.

In most cases the buildings actually mesh with the colors around them, fading into a camouflage of gray on gray tones, but when you stop to look and eventually stop to walk around in the stone dwellings, you feel connected to the history and culture of the region in a way that is simply not found elsewhere in this region.

The Modern Dwellings of Matera

The stone buildings of the Massi were used as homes well into the Twentieth Century. In the 1950’s, the Italian government relocated the residents of the Massi into modern housing elsewhere throughout the city so that they would have better access to utilities and conveniences of the time period. Historically those who lived in the cave dwellings had been excessively poor despite the richness of the culture that surrounded them.

Fortunately the Massi are no longer standing empty after decades of being alone. Artistic individuals are moving into the structures with plans for refurbishing the eclectic homes. The entire area is preserved as a Heritage Site, however, making it essential that very little changes as new owners enjoy the fun and mystery these ancient homes possess.

An excellent time to visit the city and the fascinating old homes is in the month of July. On the second of July the city hosts a festival, Festa della Madonna Bruna. Eat and enjoy merry-making with the locals before spending the day exploring the Sassi and other interesting cliffs and fields of this rocky, intriguing area of Southern Italy.