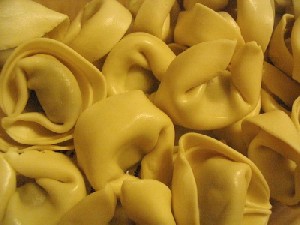 So Artusi, one of the main authority in the culinary field, wrote about Bolognese Cuisine in his famous book of recipes.

Bolognese cuisine has now its two main symbols: mortadella and tortellino. Regarding the latter in particular there are a lot of legends about how, why and when it was made for the first time.

It is said that in a tavern of Castelfranco dell’Emilia, Bologna, a beautiful Marchesin arrived. The Cook, attracted by her beauty, spied from a hole in the door… and was impressed by his navel. When the time came to prepare the dinner, the skilled chef created pastry filled with meat, a delicacy, inspired by thst noble navel. 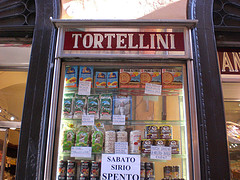 Others want a divine origin, by replacing the Marchesin with the Goddess Venus. Whatever it is, tortellino is known throughout the world, just think that in 1904 the tortellini of brothers Bertagni were exposed in Los Angeles.

In recent times, particularly after the war, tortellino was very often cooked with panna (cream), even if the rage of the traditionalists went on remarking that the true tortellino had to be served in broth. 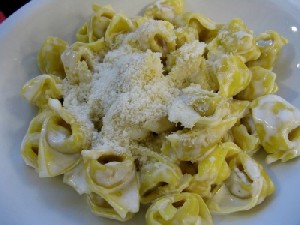 Walking through the streets of Bologna, visitors will notice that each bread and pasta shop sells “tortellini della nonna”, prepared exclusively by hand by skilled Bolognese housewives, according to its own family tradition.
Here is one very famous recipe:

Tortellini with cream, ham and Peas.

This dish is a classic of Italian cuisine, known throughout the world. Unfortunately, the high value of protein, fat and cholesterol, suggests eating eat just once in while. 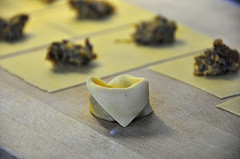 These doses are for 4 people:

Boil the peas in lightly salted water, drain them when cooked and keep aside.
In a sauté pan slowly fry in the butter the chopped onion; then add the peas, the ham cut into little cubes and the cream.
Boil the tortellini in hot salted water (as you normally do with pasta).
Drain the cooked tortellini, put them in the pan on the fire for just a moment while mixing.
Sprinkle with grated parmesan cheese and serve.

Where to eat. and stay in Bologna. 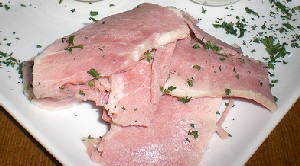 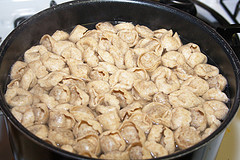