Calabria and its gorgeous territory 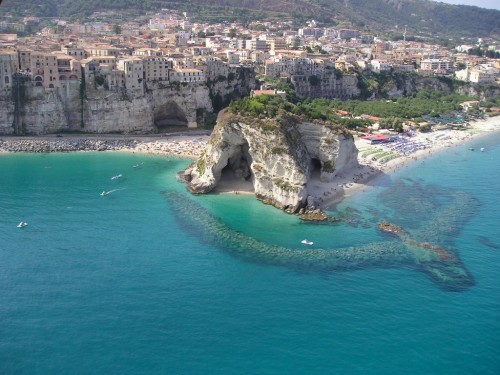 For those who love nature, Calabria is the toe of the Italian Peninsula boot, and it represents the deep south of Italy, kissed by the splendid crystal blue Ionian and Tyrrhenian Seas and separated from Sicily by the Strait of Messina. You will love to explore the Calabrian hinterland, discovering pure and pristine scenerios, where amazing green belts alternate with blue lakes and waterfalls.

For those who prefer lying in the warm rays of the sunshine and swiming into a crystal-clear sea many charming locations are along the  coasts. The splendid climate, the beautiful colours of the sea, the rocky coasts and the sandy beaches, a nature that is wild and strong, an explosion of flavours delivered by ocal food and the vestiges of its ancient origins. Calabria is a unique place that can enjoy in visitors can enjoy both winter and summer.

Calabria is the cradle of Magna Graecia and a land of ancient settlements, full of churches, monasteries, castles, palaces and towns where old traditions are still alive.

The provinces of Catanzaro is famous for the resort on the Ionian Coast and mountainous area: the slopes of Sila host the villages of Cortale, Taverna, Tiriolo. In Catanzaro worth to visit is the Cathedral and its Madonna with Child, a statue by Antonello Gagini da Messina dating back to the 16th Century. The square Norman Tower  is gorgeous and so Villa Trieste is, surrounded by wonderful gardens that contain rare plants. The Belvedere will be a perfect spot to admire the Fiumarella Valley and the Gulf of Squillace.

While here, a good visit will be Soverato, the pearl of the Ionian with its buzzing nightlife. Montepaone overlooks the Costa dei Saraceni, also known as Costa degli Aranci, another incredible location to see. When you visit Calabria, untamed and marvelous beaches are there for camping, basking and sun-bathing. These clear waters offer a brilliant background to go windsurfing, kite-surfing or scuba-diving, to discover a wonderful seabed corals. The coast stretches for 497 mi, and Calabria offers a wide choice of enchanting beaches, such as Capo Vaticano, in the province of Vibo Valentia, one of the 100 most beautiful beaches in the world!

The famous Riace Bronzes are on display in the National Museum of Reggio Calabria. These beautiful statues represents two warrior heroes and a rare example of classical Greek sculpture. They are an important remains of Magna Graecia, an era that influenced greatly the history of this region.

The region offers many opportunities to spend the holidays in its hinterland with the National Parks of Sila and its ancient plant life,  the fauna of Serre, the magnificent creeks in Aspromonte and Pollino which are the most interesting destinations. You need as well to go rafting along the Lao River or through the Sila gorges. Otherwise, if you don’t feel to get so much thrilling adventurous pathways, you can walk along the river: you will be just diving into the water and descending with a rope in the most difficult tracts with the support of expert guides. As far as the winter sports’ lovers, many ski resort are equipped with artificial slopes to enjoy skiing all year-round.
The breathtaking experience of  paragliding is at hand, too, thanks to qualified instructors will take you flying above the beauty of Calabria.

Gastrononic adventures
As regard as the lovely cuisine, the ingredients here are amazing and strong.

Famous and very local homemade pasta such as strangugghj, fileja, maccaruni that are still made today using the old methods. In particular the fileja, or fileda, as they are often called, are a particular format of fresh pasta, that in Calabria is served with various condiments.
Fresh pasta has a long history in all Italian regional cuisines. In all regions, in all the cities of Italy there are traditional pasta shapes that are nothing but the different aspects of a simple combination of ingredients: water, flour, and sometimes salt. The typical pasta “Fileja” is produced in the province of Vibo Valentia, but for some time is consumed even out by regional and national borders. The origins are ancient and, as it were, relatives, making this type of pasta is in fact linked to local traditions that, fortunately, are handed down from generation to generation.

The origin of the butcher’s tradition in Calabria probably dates from the time of Greek colonization of the Ionian coast and is, therefore, a tradition of more than two thousand years, although the first certain documentation regarding the tradition of pork processing date back to 1600, and already then it was obvious how varied were the production of products derived from the pig.

The killing of the pig in Calabria is more than just the slaughter of the beast, is a ritual, a tradition that has lasted for centuries and that has its roots in ancient rituals extremely to humans, is an event full of rituals valences of origin archaic. In the economy of the Calabrian countryside, pork has always had a great importance because it helped to overcome difficult moments related to the lack of food during certain times of the year. So You can eat everything from the pig as Calabrian people do. For example, try the frittole, and their further derivative, the curcùci, which  are pig’s scraps, what remains after the selections of the flesh of the pig, what can not be otherwise consumed and stored, The ingredients are extremely simple to define: all that, the pig, is not within the normal production of the classic sausage, ribs, entrails, shins, caul fat, lard, cut into strips, snout, trotters , ears and even the tail.
Everything is cleaned very carefully and washed thoroughly with running water the day before cooking, it is dried on mats made of reeds, called “cannizzi” and covered with white sheets. The cooking time seems endless: seven to eight hours. Frittole should stew in their own fat, should never reach full boil, simmer should like a meat sauce

Among all the goodies, the soppressata (brawn) is the best, a kind of delicious sausage derived from pork.

Some of the specialities among Calabrian products and typical dishes are the extra-virgin olive oil, liquorice, citron and herbs, honey and jams. Do not forget to try the bergamot liqueurs! The Calabrian hot chili pepper (pepperoncino) is the king in most Calabrian typical dishes. From toasted bread with n’duja sausage or sardines to pork sausages, here everything is a spicy business!  The strong and hot hot peperoncino contrasts with the sweetness released by the Tropea red onion, which is used for seasoning dishes as well as for curative purposes.