The Colosseum of Rome 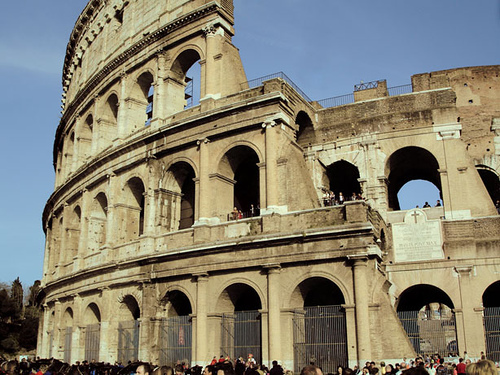 Easily the best known structure in all of Rome, the Colosseum is one of the most impressive relics of ancient times. Originally built between 70 and 82 AD, the Colosseum was designed to hold impressive battles and fights between gladiators, slaves, animals and any number of other spectacles. Built to hold more than 80,000 spectators at a given time, the massive structure dominated the landscape then, and still draws a tremendous crowd today.

While certainly an impressive testimony of the architecture of the ancient Romans, the Colosseum is not only a tribute to the building skills of an ancient people, but also to the cruelty and tyranny that existed during this time period in the Roman Empire.

Thousands of slaves, criminals and religious martyrs met their death inside the Colosseum, almost always for the amusement and sport of others. More civilized battles were held as well – including mock naval battles – but it was the number of early Christians that died inside the Colosseum that led later Christian leaders to preserve the building and all it represents.

While preserved to some degree, it was not entirely kept intact. The stones that built the impressive structure were simply too handy to be ignored as Rome continued to build and grow. Other buildings in the area took stones from the Colosseum, leaving it in the state it is today. Visiting Rome, you can see stones from the building in St. Peter’s Cathedral, the Palazzo Venezia and defense systems along the river, among many other locations.

While slightly dismantled, the Colosseum is still in impressively good condition. The ancient amphitheater is one of the most sought after sights in Rome, and naturally crowds are to be expected when you plan a visit. There are ways to buy tickets ahead of time. You can buy a combination ticket at Palatine Hill or simply buy your Colosseum ticket online. If you’re looking for additional information as you visit the ruins, you can also go to the audio tour window and buy your ticket along with the audio tour equipment.

As you’re enjoying the Colosseum, it’s unlikely to find a time that there is not a crowd, but you can still enjoy excellent photo opportunities. For a bit more, you can pay some of the wandering gladiators outside the Colosseum to take a picture with you as well – and there will be ample souvenirs in the area to buy as well.