The Pantheon: A Great Reminder of Roman Prestige 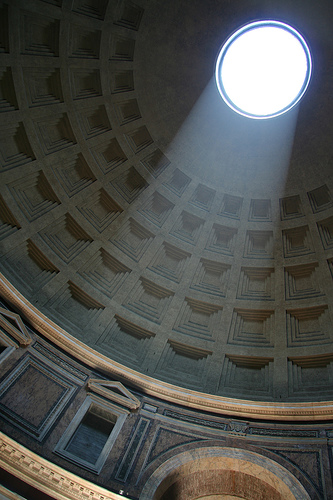 Built 1800 years ago, the Pantheon is one of the most impressive reminders in Rome today of the grandeur of ancient Rome. Originally built as a temple for pagan gods by Agrippa in 27BC, the Pantheon was converted to a church in AD 609. Today it is open for visitors and contains the remains of the famous artist Raphael who died at age 37 in 1520 as well as the first King over a unified Italy, Vittorio Emanuele II who died in 1878. While the structure is impressive, it is the history that accompanies the building that brings it to life for visitors today.

The Pantheon’s Impressive Nature
The Pantheon is impressive. Thick brick walls and large marble columns are stately. The huge bronze doors open into the Pantheon, but the most impressive feature is the dome. A stately dome sits atop the building at an impressive 43 meters in height. This is especially outstanding when you consider the dome was the largest in the world until 1436 – almost 1500 years of dominance in architecture. In the center of the dome is a large opening, the oculus, which provides the only source of light into the beautiful interior.

The interior of the Pantheon has changed over the years in accordance with the purpose of the grand building. Once a temple for all of the gods, it because a Christian church and was redecorated with this purpose after AD 609. The marble floor of the Pantheon is still the original flooring laid down by the ancient Romans, however. The flooring is a marble pattern of geometric shapes and is most impressive in its design and scale.

The History of the Pantheon
The current Pantheon is not in the form it was originally, however. The first structure on the site in 27 BC was built in a T-shape, but it burned down in AD 80 but was then rebuilt. The building was then burned down again in AD 110 after being struck by lightning and was commissioned again in AD 118, but to be rebuilt in a circular design that we see today.

When building the circular version of the Pantheon, the large dome was the most difficult aspect to construct. With methods still used today to support a ceiling without reinforcements, the walls of the Pantheon gradually descend in thickness. They start at 6 meters at the base and descend to  only 2.3 meters near the center of the dome in a lighter cement.