The Most Serene Republic of San Marino 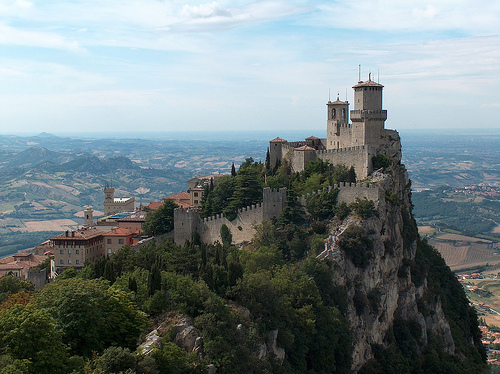 Along the Eastern seaboard of Italy you’ll find a large number of resorts, water activities, beautiful ocean views and an ample amount of fun and music. This is the birthplace of the accordion, and in the villages and countryside of Emilia Romagna you’ll hear it’s music long into the night as the local enjoy themselves, hearty meals and good music. Also in this region, you’ll find a bit of a surprise. San Marino, a tiny republic, is sitting alongside Italian countryside.

In San Marino, there are rolling hills, rocky outcroppings, towns dotted up on hillsides and green beauty in every direction. San Marino might be surrounded by Italy, but the tiny Republic has been its own country – completely free of Italians, if not Italian influence, since 301 AD. With a constitution dating back to 1600, this is not only the oldest European republic; it also boasts the oldest constitution still in effect.

San Marino shares the same countryside as the Marshes in Italy. The area is not as heavily traveled by tourists in Italy despite its natural beauty and love of food and merriment. The Apennines Mountains shadow the republic entirely and the land can only be described as rugged. Yet this tiny haven has sheltered refuges throughout its extremely long history. It is due to sheltering those supporting the unification of Italy that the tiny republic was not made a part of Italy during the period of unification.

Indeed it was also quick friendship struck with Napoleon Bonaparte that saved the country from French occupation as well. During World War I and World War II, the country often served as a haven for those caught in the proverbial crossfire.

When touring the Emilia Romagna region of Italy, drive down into the Marshes and cross the border for a quick tour of the rocky outcroppings and deep history of San Marino. The capital of the tiny republic is also called San Marino and is home to a rich culture of music and tradition. The Three Towers of San Marino are famous as an icon of the country and the region and are most certainly worthy of a tour.