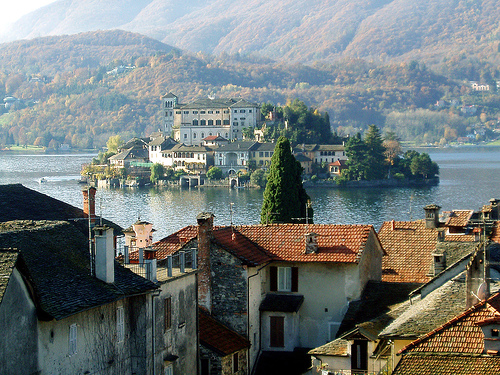 During the month of June, one of the most beautiful and lesser known lake communities in Italy hosts a music festival of some renown. The Festival of Ancient Music is held in the latter part of June every year in Orta San Giulio, a small town on the banks of Lake Orta.

Lake Orta is considered by many to be one of the most peaceful and attractive of the subalpine lakes of Italy. Lake Orta lies to the west of Lake Maggiore in northern Italy. It is approximately fifty miles northwest of Milan and makes an excellent day trip if you’re not able to spend the night in the beautiful small town.

Orta San Giulio is a treasure trove of architecture with shuttered homes and palaces in pretty pastels lining the streets of the small peninsula. With water on all but one side, Orta San Guilio appears to be floating. In truth, it is the small island community of Isola San Giulio that does float in the lake.

Tour the narrow cobbled streets between beautifully architecture buildings as you experience music coming from courtyards. The center of the event is the Villa Tallone, and the festival is organized by the Association “Amici della Musica” of Novara. It is recognized for being a very prestigious event just as Lake Orta is recognized as one of the Top 10 Luxury Travel locations for The Guardian in the UK.

There is much to see in Orta San Giulio outside of the music festival. Museums have special exhibits ranging from parasols to personal tribute to four centuries of hotel and recreation wait staff. Water sports on the lake abound in the warmer months, but there is much to do in the winter as well. The Mattarone is equipped with lifts so that visitors and residents alike can enjoy winter sports. All told, the picturesque town of Orta San Giulio as well as the surrounding lake area make an elegant and relaxing vacation spot.