The Art of Michelangelo in Florence 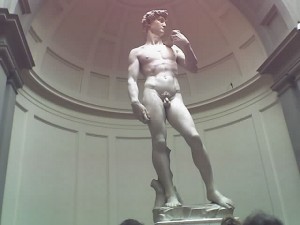 Today you can see a huge assortment of items from Michelangelo during your visit to Florence and the surrounding areas.

In the impressive museum for sculpture, you’ll find a nice assortment of Michelangelo’s sculptures as well. One of these is the Roman god of wine, Bacchus, decorated with grape vines and holding up a chalice. Another version of David, the “David Apollo” is found in the museum as well as a relief sculpture of the Virgin Mary and Jesus and a bust of Brutus. While just four of a great many statues inside the museum, they are certainly an impressive few.

In the Museum of the Duomo, you can expect to find many prized treasures of the Renaissance, and among them is another sculpture by Michelangelo. The statue, The Deposition, shows Christ following his death being held by the Virgin Mary, Mary Magdalene and Nicodemus. There is a more famous Pieta, by Michelangelo, but that statue is located and on display in Rome.

In Michelangelo’s home, a small museum holds several sculptures by the master as well as some drawings. Two of Michelangelo’s early relief sculptures are present in the home, the Battle of the Centaurs and the Madonna of the Stairs.

Finally, in the City Hall of Florence, Michelangelo’s sculpture, “The Genius of Victory” is found. There should be another work by Michelangelo in this building, the “Battle of Cascina”, but the painting was either never started or have been lost through the ages.