The Duomo in Siena – Beauty and Mystery 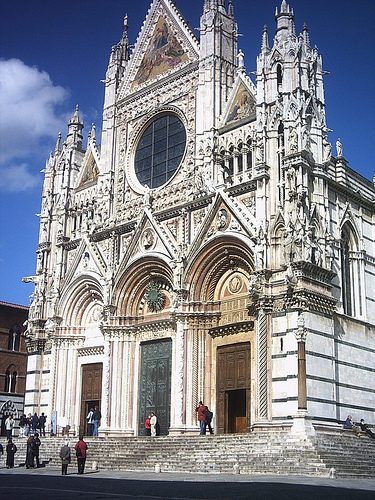 Siena, a popular city to visit in Rome without being overwhelmed with tourists year-round, is a peaceful place full of art and culture. The Duomo is the perfect place to visit if you hope to soak in true Tuscan art and a bit of Gothic architecture. The Duomo was built from 1215 to 1263 with help from famed Gothic architect, Nicola Pisano. His son, Giovanni Pisano, took over part of the project in 1285 including many of the statues that decorated the stately church. Today most of the originals are in museum off-site, and the Venetian mosaics with heavy gold tones have overtaken much of the decorating.

Unfinished Walls
The large cathedral was at one time to be expanded. Already large, the Siena residents thought to make it even bigger than St. Peter’s in Rome to demonstrate the power of the city-state. While a new additional, a nave, was started off the right transept in 1339n to demonstrate the wealth and power of the people of Siena, the project was never completed. The plague hit the town in 1348 killing huge numbers of residents and stopping the plans to expand the cathedral. There are still half-finished walls on the cathedral from the project that was never finished. These walls today remind us of Siena’s rich and tragic past.

Mosaic Flooring
The amazing floor of the Duomo captivates visitors for hours. 59 etched and inlaid marble panels were laid between 1372 and 1547 with the help of Italy’s finest artists. The inlaid panels are designed as scenes that can be amazingly intricate. While most are uncovered for viewing, there are panels that are covered most for the year and opened only in the fall in honor of Palio. Admission is charged at this time as well.

In the center of the Duomo, Matteo di Giovanni’s design, Massacre of the Innocents, created in 1481 is a centerpiece. While not the home of a decorate floor, the Cappella Chigi is one of the most touching areas of the Duomo. The octagonal room was designed by Gian Lorenzo Bernini in 1659 and is home to the Madonna del Voto. The city of Viena was dedicated to the Madonna following a battle victory, and this 13th century painting offers hope and salvation during times of need. In the most recent example, the people of Siena laid the keys of the city at the feet of the Madonna in this room and hoped to be delivered from Nazi occupation in 1944. Two weeks later they were liberated. Beautiful, mysterious and amazing, the Duomo is the true centerpiece of Siena.