Bologna: a small guide to appreciate it! 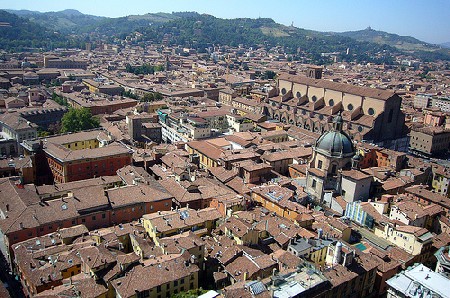 Bologna is the capital of the homonymous province and of the region Emilia Romagna. The city has about 380,000 inhabitants and is located in an area consisting of wide plains and gentle hilly areas.
Bologna is known for having hosted the first university in Western Europe, towards the end of XI century. That tradition has always favoured the emergence of cultural and literary activities of great value. Even nowadays it is a favourite destination for students from all over Italy. 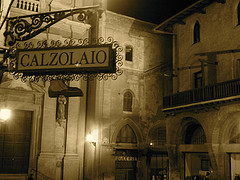 The architectural and urban design retains all its original splendour: palaces and ancient churches are home to valuable works of art that make clear the importance that this city experienced. Between the Old Town there are almost 40 km of arcades that offer visitors beautiful and original shopping itineraries.
Today Bologna has an important and economic production and it is among the most active cities in Italy. Automotive industries as Ducati and Maserati are strongly rooted in Bologna and also in the automotive and motorcycle field every year there is the Motor Show, one of the most prestigious international exhibitions dedicated to the two and four wheels. 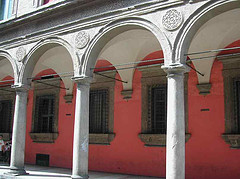 Bologna, a city of arcades, is one of the favourite destinations of tourists, Italians and not, as it still retains the charm of a large city in the past, rich in monuments and works of art.
Among the many attractions that Bologna offers, there are:
the 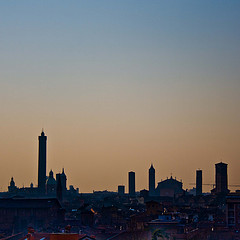 Piazza Maggiore, the heart of the old city and famous for the beautiful Fountain of Neptune by Giambologna (XVI century), overlooked by the main buildings of the civil and religious life of the city (Basilica di San Petronio, Palazzo del Comune, Palazzo del Podestà and Palazzo di Re Enzo); 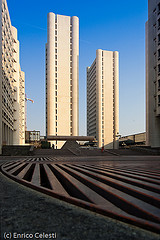 the Basilica of San Petronio, built in the XIV century, houses works of the greatest Italian artists of all ages, such as Jacopo della Quercia, Filippino Lippi, Vignola and many others;
the Palazzo del Comune is today the site of some important cultural institutions such as the Museo Morandi, where there are the works of the great master donated to the city of Bologna;

the Palazzo del Podestà, built in the XIII century at the intersection of two roads, is characterized by the Tower dell’Arengo and the so-called Voltone del Podestà; that is a large porch which is decorated with statues of the four protectors of Bologna, San Petronio, Saint Procolo, St. Dominic and St. Francis;
the Palazzo di Re Enzo, a XIII century building (that takes its name from its most famous visitor, King Enzo, son of Frederick II of Swabia) houses the municipal archives and the Carroccio, a big chariot that was used in war to bring the signs of the city;
the monumental complex of St. Stephen, born from the union of courtyards and arcades of seven churches and chapels, representing one of the best preserved Roman buildings in the city;
the Church of Santa Maria della Vita, which preserves the heartbreaking terracotta group of the Lamentation over the Dead Christ, built in the XV century by the sculptor Nicholas dell’Arca;
the two towers a symbol of Bologna, the Torre Garisenda (48.16 meters) and the Torre degli Asinelli (97.20 meters), whose height characterizing the profile of the city;
the Pinacoteca Nazionale, one of the most important museums in Italy, which hosts works by Raphael, Carracci, Reni, and many other artists connected to Bologna.
Countless are the churches and the historical buildings that visitors can enjoy in Bologna. 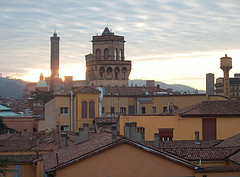 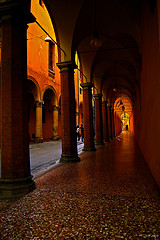