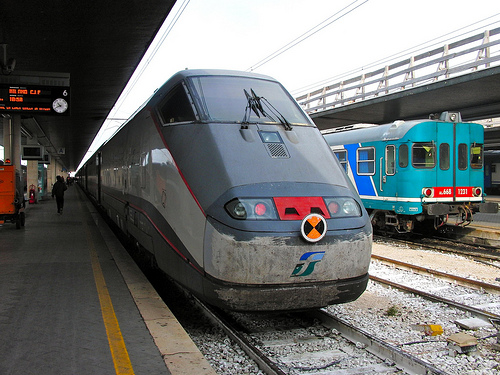 There are many ways to make your way around Italy, and one of the best, fastest and easiest is to travel by train. The train routes in Italy let you move from one major city to the next without hassles, especially once you learn how to use the ticket windows and have gone through the process a time or two. If you’re looking for a way to enjoy the major cities without the headaches of a car rental, consider travel by train.

Train Options
There are a few different trains that run through Italy. The Eurostar (ES or Treni Eurostar Italia) is the fastest and premier train that moves only between major cities. Seat reservations are mandatory on the trains and it will move you quickly between cities in comfort. The Intercity and Intercity Plus trains have first and second class and also require seat reservations. The first class seats are less crowded and the train moves quickly between major cities throughout all of Italy. The Regionale trains are smaller, local trains that move between virtually all cities working around work and school schedules. These trains can become especially crowded at “rush hour” and most only have second class seats, but are the least expensive option as well.

Train Tickets in Italy
To buy your tickets, see the window attendant at the station or buy them from a ticket machine located in the station. Be sure to check the train schedules and routes to verify your route and destination. Once you’ve purchased your ticket, you’ll need to verify it on the way to board your train. You verify the ticket by sticking one end into the bright yellow boxes around the terminal and letting it print the date and time of the first use. There are penalties for not validating the ticket properly although you have a small chance of pleading the ignorant tourist – at least the first time. Once you’re on the train, the conductor will check your ticket, so be sure you keep it handy.

Train Travel in Italy
Trains are popular in Italy and they are favored by workers and students. If you travel at times most workers and students aren’t getting to and from their destinations, you’ll have fewer trains to choose from, but there will be more seats available. Also be aware that there are fewer trains on weekends and holidays. Buying tickets in advance will let you plan your trip most effectively and give you a stress-free journey as well.