The Castle of Torrechiara, history, love and legend. 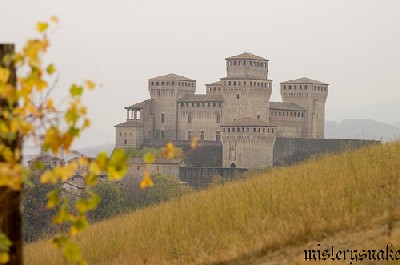 Torrechiara is part of the municipality of Langhirano in the province of Parma and is known for its imposing castle built between 1448 and 1460 by Pier Maria Rossi II (1413-1482), Count of San Secondo.

It is located on the foothills, in an area always remembered for the mild climate and it is surrounded by vineyards, offering a beautiful view towards the valley and the town.

Torrechiara Castle was built in honor of the Bianca Pellegrini, lover of Pier Maria Rossi, and so it became her luxurious residence. 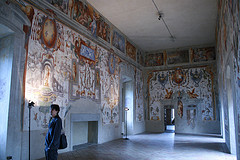 The Castle perfectly preserves its late-medieval squared structure with its four massive towers and crenellated curtain wall. It is accessible via a long covered entrance leading to the courtyard, where there is the little church of St. Nicomedes, whose front door is studded with the monograms of Bianca e Pier Maria.

Inside there are sevral beautiful frescoed rooms. The old kitchen, the room of Jupiter, of Pergolato, of Paesaggi (landscapes), of Vittoria (victory), of Angeli (angels), of Velario and of the Stemmi (crests) offer frescoes made by Cesare Baglione during the Sforza period. 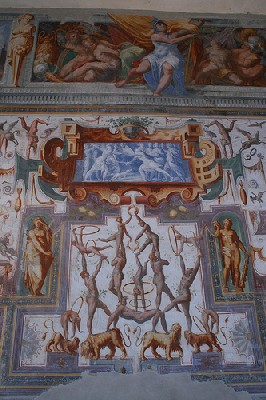 Upstairs there are the rooms of Acrobati (acrobats), decorated by artists from the school of Baglione and Paganino.

Particular attention deserves the Camera d’Oro (golden room), whose name comes from the leaves of gold that once covered the panels on the walls.
The room still has a rare cycle of frescoes attributed to Benedetto Bembo depicting scenes of celebration of chivalric love referred to Bianca and Pier Maria.

It is still possible to recognize the crests of the two lovers, two hearts with the phrases “Digne et in aeternum” (worthy and ever) and “Nunc et Semper” (now and forever), demonstrating the eternity of their love.
The golden room overlooks a large portico built at the end of the XV century, when the castle lost its original military functions and became house.

There is a legend saying that in the castle during the nights of full moon, when the mist envelops the castle, it appears the ghost of a beautiful duchess, walled up by her husband, wandering into the tower of the manor offering passionate kisses to men on her way!! 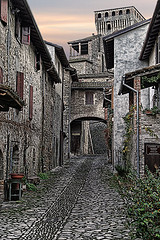 The Castle was hit by the earthquake in December 2008 and part of it is currently in the process of securing and restoration of the frescoes. 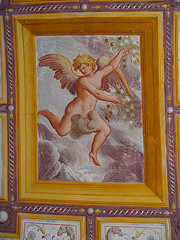 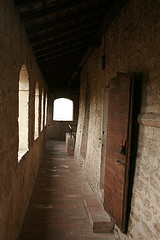