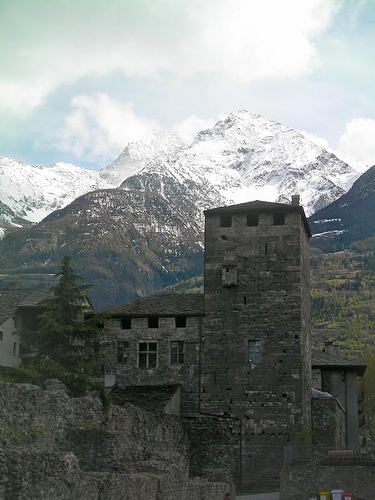 A tiny region of Italy far north of Rome, Aosta is all but forgotten now by many tourist, yet this beautiful region in the Alps was an integral part of Italy for centuries. Built as a military post and accompanying city, Aosta is a testament to the ingenuity and dedication of the Roman legions that were stationed in the town during the reign of Caesar Augustus.

In the prime of the Roman Empire, Caesar Augustus realized that he must defend the Alpine passage from intruders, so he sent troops to the area to built a fort. Industrious to a fault, the Romans built an impressive garrison, and then had time to go on and build an entire city. The Romans were said to use downtime to build up the area in order to keep troops from getting bored while waiting for action. In this case, the downtime turned into the perfectly squared and plotted town of Aosta.

Aosta is not only precise in its measurements, it is still standing. Unlike the ruins in Rome or in the almost preserved town of Pompeii, Aosta was not a city of glamour and relaxation. It was a purposeful town and has been preserved in ways that are still useful. You can walk across the original Roman bridge and stand on the original river rock used to create the structure while you admire the roads paved in the river rocks.

The Alps produced terrific amounts of rock and stone over time, and these building materials were used to not only build the town, but the roads as well. The gray roofs over the gray walls is a bit somber at times, but the sharp contrast between that gray background and a striking blue sky when it is appears is breathtaking.

Aosta has a strong history as well as serenity in its mountain setting. The town was a major thoroughfare for religious pilgrims as they traveled out of the heart of Italy into the holy land. Pilgrims traveling on foot and the processions that accompanied those heading for the crusades passed under the original Roman bridge as well. With so little changed to the original architecture over the centuries, it is easy to imagine the huge amount of travel this town received and how it would have looked.

In fact, many of the treasures that bedeck other Italian towns are missing in Aosta. This absence is blamed on traveling thieves over the centuries who took advantage of the town along the route onward. All told, the history and intrigue of Aosta is considerably worthwhile for a visit. If nothing else, just relax in a bed and breakfast and enjoy the invigorating mountain air.