The Round Castle: Castel Sant’Angelo 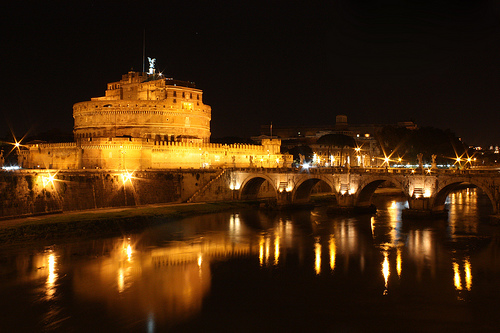 With almost 1800 years of history including some blood-chilling prison scenes, the Castel Sant’Angelo is the favorite landmark of many Romans, and this is saying a great deal as these native people tend to be blasé about the wonders of their fair city. The castle is perfectly round making it an interesting addition to the skyline and also a grand addition to the drama and darker side of the city’s history.

The origins of the building date back to 135 AD when the Emperor Hadrian decided to build himself a tomb. The site Hadrian selected was on a grassy knoll beside the Tiber River, much like the tomb of Augustus before him. He began construction of the mausoleum and bridge, but they were not completed at the time of his death in 138AD. His successor, Antoninus Pius, had the tomb completed and moved Hadian’s ashes into their final resting place.

At the time of his burial, the memorial was a giant mole almost 1000 meters in circumference and was faced with Parian marble. A glade of evergreens covered the dome of dirt along the top. Today, only a few stones that once supported the casing remain visible in the castle structure.

The inside of the mausoleum remained a secret until 1825 when the main door into the tomb was discovered in a square basement facing the bridge. The door opens onto a spiral ramp which descends into the burial place of Hadrian and succeeding emperors. The spiral ramp is still visible today.

In AD271, the round building began renovations to make it into a fortress and the Aurelian wall was added to fortify the southern flank. The fortress was completed in 401 just in time to be part of the great sacking of Rome. Rome was sacked again in short order, and then fell victim to the plague. The round fortress became a church during this time as the Pope saw a vision of the Archangel Michael standing on the summit of the hill. The chapel was built and it was rebaptised Castle of the Angel Saint.

During the Renaissance a castle was built atop the fortress and that fortress was eventually connected with St. Peter’s Basilica through a fortified walkway. Pope Clement VII used this passetto to find sanctuary during the last sack of Rome in 1527. The castle was used a prison as well by the pope and executions took place in a small courtyard within the confines of the palace and fortress.