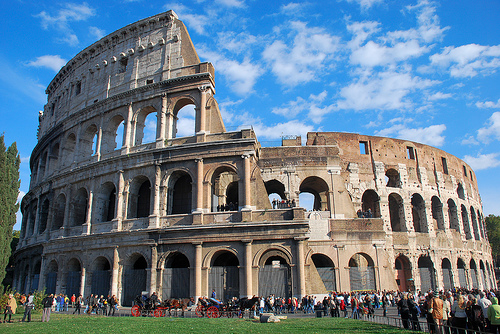 The Coliseum, also known as Amphitheatrum Flavium, was built during the reign of Emperor Vespasiano and was inaugurated by his son, Tito, in 80 A D with celebrations 100 days long.

It is considered an architectural and engineering wonder, and remains as a standing proof of both the grandeur and the cruelty of the Roman world. It was elected one of the New Seven Wonders of the World.

Here some information about its structure:

· Floors: the first consisting of 3 arches framed by half, the fourth floor and divided by pilasters.

It used to held public events such as gladiator fights, mock naval battles and wild animal hunts. Fighters were slaves, prisoners or volunteers and in later times Christians killed by lions. After 404 AD gladiatorial battles were no longer held, but animals such as lions, elephants, snakes and panthers continued their fights until the 6th century.

During the following centuries the Coliseum initially became a cemetery, and then a fortress called “Frangipane” and finally a sort of cava for the construction materials. The degradation of the structure due to fires, earthquakes and sacks was stopped by Pope Benedetto XIV who consecrated the Amphitheatre to the Via Crucis and forbade any ulterior spoliation.

Today, in Rome, the Coliseum is one of its most famous landmarks and tourist attractions. Although it survives only as a ruin, it still rates as one of the finest examples of Roman architecture and engineering.

The booking is compulsory for groups with more than 14 people. (guide is included).

Please call to confirm those information, so you can make sure changes won’t disrupt your programmes.

Click here for more information about how to visit Rome.